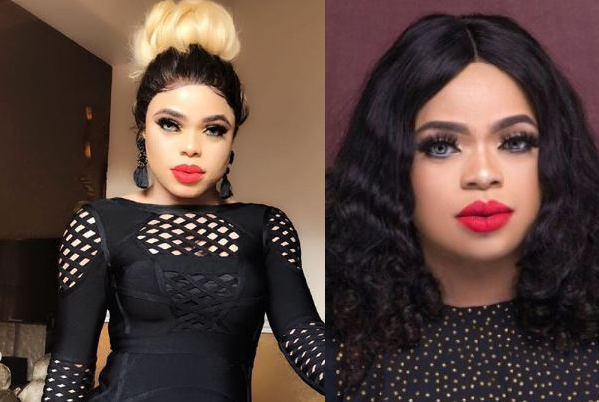 Bobrisky, has reacted to his body odour claims by a fellow crossdresser, identified as JP Blush.

The “hard-headed” Bobrisky via his Instagram Page described JP Blush with unflattering terms saying he is just trying to be relevant after going through some crises.

Bobrisky also alleged that he was sent by his arch- enemy Toyin Lawani, who had earlier lambasted him for his spiteful comments on her 37th birthday.

Recall that JP Blush had alleged that Bobrisky suffers from a strong body odour that sticks to his clothes.

JP Blush also revealed that Bobrisky’s mother is not dead but a petty trader in Magodo.

The man further said that Bobrisky was disgraced out of Tiannah Empire, a fashion enterprise owned by his “hater” Toyin Lawani.

“GUYS PLS WHO IS DIS UGLY EAGLE LOOKING LIKE HE IS JUST WAKING UP FROM THE DEAD LAND ? JPBLUSH I GUESS YOU ALL DON’T KNOW HIM. HE IS JUST TRYING TO BE RELEVANT AFTER MANY CRISES HAVE FALLEN ON HIM. NOW AM LISTING ALL THE CRISIS BELOW.

1) HE IS LOOKING UNKEPT AND HUNGRY. FROM HIS LONG NECK LIKE CAC CHURCH STANDING FAN YOU WILL KNOW HE IS HUNGRY FOR FAME.
2) FROM HIS FAT NOSE  WE SHALL KNOW THEM. THE FAT NOSE IS THE ONLY LIVING ORGANISM WORKING ON DIS DEAD CORPSE BODY !!!! EVERY OTHER PLACES ARE AS DRY AS OVER DRY STOCK FISH !
3) FROM HIS HEAD SHAPE WE ALL KNOW IT LOOK EMPTY, BRAINLESS WITH FAULTY MEDULLA OBLONGATA. I’M NOT DONE YET PLS.

“LASTLY HE NEED TO BE CHECKED. NOW LET NOW GO BACK TO WHO SENT YOU TO ME. YES I SAID SHE BROKE AND I WILL STAND ON MY WORDS NOTHING STILL CHANGE THE FACT THAT YOUR SO CALLEDMOTHER THAT CALLED HERSELF (QUEEN OF GODDESS)IS FUCKING BROKE.

“YOU ALL SHOULD NOT FORGET WHEN I UPLOADED A RECEIPT WHERE SHE WAS OWNING ME 250,000 I BORROWED HER. IF DOING GOOD TO PEOPLE IS WRONG THEN I ACCEPT AM WRONG TO HAVE BORROWED THAT BITCH MY MONEY.

“ONLY FOR ME TO ASK FOR MY MONEY AFTER MONTHS WAR BEGAN !!!!!! . BUT AS YOU ALL KNOW BOB AM SO CRAZY. I MIGHT BE NICE TO PEOPLE, BUT I DON’T TAKE NONSENSE. FINALLY SHE PAID ME AND I WAS HEARING GIST THAT SHE SENT ME AWAY, I WORKED FOR HER BLA BLA BLA.

“HAVE NEVER WORKED FOR ANYONE IN MY LIFE !!!! I HUSTLE HARD TO MAKE ALL THE MONEY I MADE TODAY. THIS IS Y I WILL NEVER BELIEVE DIS SO-CALLED CELEBRITY EVERYWHERE BECAUSE MANY OF THEM DON’T HAVE 1MILLION IN THEIR ACCOUNT.

“THEY ALL JUST LIE TO BE WHO THEY ARE NOT. I’M NOT EXCLUDING MYSELF. NEVER ALLOW CELEBRITIES PUSH TO WAT THEY DON’T HAVE.

“AS IF THAT WAS NOT ENOUGH. I CAN BET MANY OF YOU CAN’T ACCEPT WAT SOME OF DIS PEOPLE DO TO ME JUST BECAUSE I WANT TO BE NICE TO EVERYONE. THAT BITCH KEEP LYING TO EVERYBODY.

“IF YOU WANT DIS BATTLE TO END STOP LYING TO PEOPLE YOU MADE ME. BECAUSE THE MORE I KEEP HEARING THAT FROM PEOPLE I GET UPSET. HOW, WHERE, WHEN DID YOU MADE ME.

“I STILL HAVE ALL THE DOCUMENT I USE TO PAY DIS BITCH BILLS, AND I DOUBT IF DIS BATTLE BTW I AND DIS SO CALLED GODDESS IS ENDING SOON. BECAUSE I NEVER DESERVE ALL THOSE LIES.”

Omotola Jalade and her hubby bought their first daughter and BMW...

Things that can keep a man – Nadia Buari reveals

Colombian coach sacked for reportedly sleeping with his player’s wife