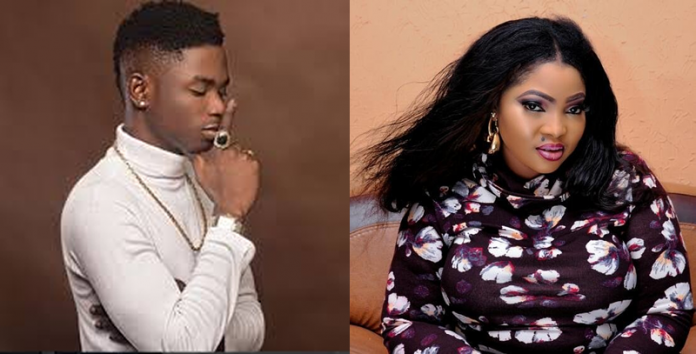 It seems there is no love lost between popular gospel singer, Busola Oke, and his secular colleague, Keshinro Ololade, as Oke has threatened to scapegoat him for stealing his song.

Oke – popularly known as Eleyele – is accusing Ololade, whose stage name is Lil Kesh, of infringing on her copyright with the release of his song, Undertaker.

Eleyele stated that elements of her 15-year-old eponymous single were used in Lil Kesh’s song which was released on February 29.

The angry gospel diva fumed that she would make a scapegoat of Lil Kesh.

“His manager called me and told me they wanted to use my song and I told them I didn’t understand. I told them that they should discuss whatever they wanted with my lawyer.

Later, my lawyer told me that they had called him and that he told them not to use the song. A week later, Lil Kesh’s song was released. I think they had already used the song before they called us. We have been trying to reach him since then.

My lawyer wrote to them stating that we were ready to go to court, but we couldn’t find his office address; so, we had to post the letter on social media. Maybe he thinks I’m an illiterate that cannot do anything.”

Decrying the lack of respect artistes have for intellectual property, Eleyele said,

I feel very bad about it because it is getting too common. I think that’s what is in vogue now. But I’m going to end it. I will use Lil Kesh as a scapegoat; I will accept nothing but justice. He will meet me in court.”

SpringFest One Fashion Show at the University of Michigan

Building a Gimbal in Rust: An Introduction

‘God is not Central Bank, people should stop begging Him for money’ – Korede...

‘My marriage to Tonto Dikeh became a movie script’ – Olakunle...