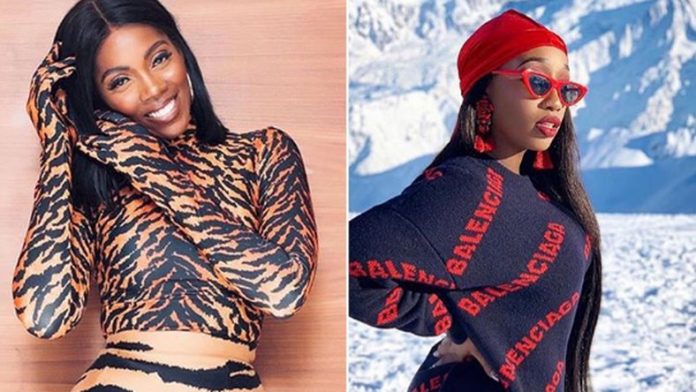 Kenyan singer and songwriter, Victoria Kimani has apologised for taking shots at Tiwa Savage in one of her recent Instagram posts.

On Wednesday, April 3, 2019, Kimani dropped her #Fuckyouchalllenge song and in her own cover, she threw shades at Tiwa Savage calling her ‘Grandma African bad girl’.

She said: ”Grandma African bad gyal,turning 45 and still claiming bad girl.You can block me from a show but you can’t block my blessings.We all know you selling pu*ssy and it’s so

She also went on to accuse YCee of stealing her song. Kimani claimed that the lyrics in YCee’s hit song ‘Juice’ were actually hers.

The Kenyan music star has, however, apologised to Tiwa Savage for slut-shaming and age-shaming her, saying she was wrong.

She wrote on her Instagram page: She is right. I apologise for slut-shaming and age-shaming. Shame on me. That was very wrong, but the other stuff, I can never apologise.

Meanwhile, YCee has responded to the Kimani’s claim saying the Kenyan singer is looking for free promotion.

YCee who responded to the claim to through his manager, Aquari in an interview with Punch said they first thought her claim was a joke.

‘’She was looking for a free promo that is just basically what she was doing. If you go online, you would read the response of people to her accusation’

The dangers of eating too much restaurant food

SpringFest One Fashion Show at the University of Michigan

Going Beyond Amazon: A New Model for Authors, Retailers, and Publishers

How To Use Basic Design Principles To Decorate Your Home

A first glimpse at Java 9: Early access release of JDK9...